While Sunday River had been developed in the late 1950s, it was nowhere near the powerhouse it would become in the 1980s. As such, there was still room to start another ski area in the greater Bethel market.

Local logging brothers Norton, Stuart, and Donald Cross began developing a ski area on the northeastern slope of Mt. Abram in the spring of 1960. Two slopes were cleared for the debut season, served by a 1,000 foot T-Bar. In addition to skiing, skating and tobogganing were also offered.

Mt. Abram opened on December 11, 1960 and was formally dedicated that Christmas Eve.

For its sophomore season, Mt. Abram expanded to the upper mountain when it installed today’s Maine T-Bar. The 3,350 foot lift served some 900 vertical feet with trails more than doubling in length. At this point, Mt. Abram was comparable to Sunday River’s previous season facility size.

Two years after Sunday River added its Mixing Bowl area, Mt. Abram responded by opening its own separate beginner area for the 1965-66 season. Serviced by a Hall T-Bar, the new complex featured a handful of gradual novice trails.

Significant trail improvements took place for the 1966-67 season, as 25 cases of dynamite and 3,000 bales of hay were used to smooth terrain and improve conditions.

Mt. Abram installed a new 4,121 foot long double chairlift for the first full season of the 1970s. The installation of the Way Back Machine meant that Mt. Abram had beaten Sunday River to the punch for being the first chairlift served ski facility in the region. Not only did it increase Mt. Abram’s uphill capacity to 3,200 per hour, but it also increased its vertical drop from 900 to 1,030 feet, depending upon the publication. An oldie-but-goodie.  We found this vintage tv ad featuring our former GM Bob Harkins, back in the day when he coached the US Ski Team. 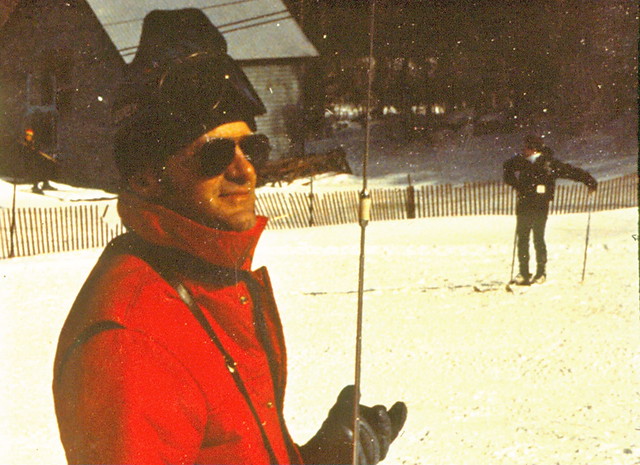